MERLION company has for the second year in a row won in nomination Russia & CIS: Consumer Tech Distributor of the Year.
15 февраля 2018 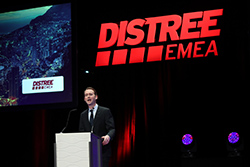 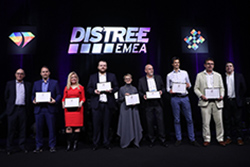 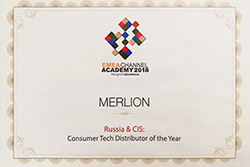 In order to determine the winners, the on-line poll had been held over several months before the forum, the poll had been attended by thousands of suppliers, resellers and retailers over the entire EMEA region (Europe, Middle East and Africa). As a result seven distributors: ABC Data, ALSO, CMS Distribution, Exertis, Ingram Micro, MERLION, Tech Data, had been recognized to be the best on the markets of Central and Eastern Europe, in the Middle East and in North Africa, in North Europe, in South-Eastern Europe, in Africa, Russia and CIS. The awarding took place on February 9 in the framework of gala dinner.

Forum DISTREE EMEA 2018 was held in Monaco since February 6 till 9 gathering more than 250 managers of sales and procurement departments and heads of companies of the leading retailers, e-tailers and distributors of EMEA region from more than 50 countries. More than 4,000 personal face-to-face meetings have been scheduled long in advance, about one thousand meetings more have been organized on the spot. Hundreds of technical brands have taken part in forum; this event is an important business platform for the development of business within the boundaries of EMEA region for these brands.

It should be noted that the award of 2018 is the third one received by MERLION at forum DISTREE EMEA. One year ago in February 2017 the Company was bestowed the same status, while its first award of the European level was received by the distributor in 2014 “EMEA Channel Academy: 2014 Awards”.

The date of the next 17th in succession forum DISTREE EMEA has been announced already, it will be traditionally held in Monaco on February 19 – 22, 2019.

The text has been prepared with the use of an official press release of DISTREE EMEA 2018.