The distributor was awarded for its continued contribution to the promotion and sale of Intel-based devices in the Russian market.
24 december 2019 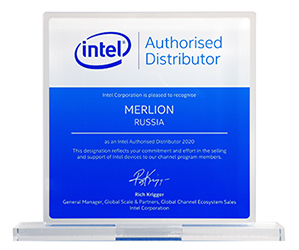 Intel Corporation noted the results of cooperation in 2019 with its authorized distributor, the MERLION, and received awards for its continued contribution to the promotion and sale of Intel-based devices in the Russian market. “We look forward to continuing our business relationship and wish you every success in 2020!” says the letter accompanying the award, signed by Rich Krigger, General Manager, Global Scale & Partners Team, Intel.

“It is a great honor to receive such a high rating from Intel. We are not just pleased; even greater results and future successes inspire us. Intel is one of the strategically important vendors for us, and in the coming year, we will put all our competencies and efforts to improve our business results,” says Tatyana Skokova, distribution director of the Broad Profile Distribution pision at MERLION.

It is worth noting that the award received from Intel is not the first. The Corporation has several times noted the success of MERLION in the promotion of solid-state drives, mini-PCs, and two-in-one devices; in the supply of smartphones and tablets based on the Intel platform, compact PCs of the NUC line; for the outstanding sales growth of components and other brand products; for contributing to the promotion of Ultrabook™ products, etc.

MERLION has been an authorized Intel distributor in Russia since 2006.